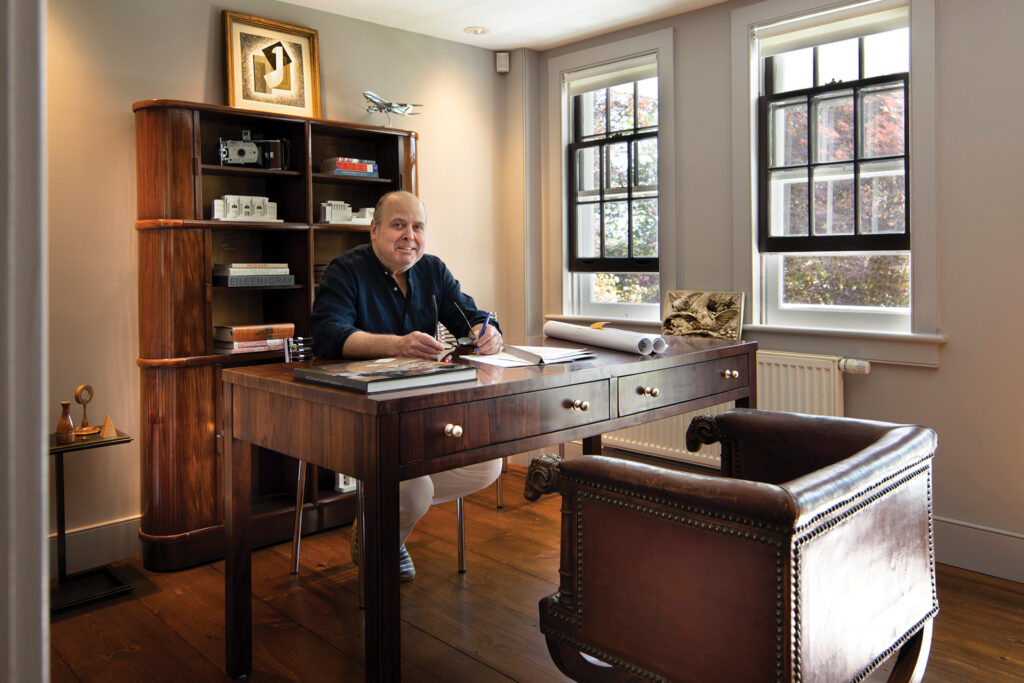 When Kusnick and his wife, interior designer Tracy Brown, saw their soon-to-be-home, they knew their lives would never be the same. They weren’t wrong.

As a longtime architect and Founding Principal at New York City residential construction juggernaut AE Greyson, Miami native Joseph Kusnick knows his way around a modern structure. As a designer and builder of some decidedly 21st century projects in Gotham including the Barry residence for Annabelle Selldorf; the Einbender residence at the former Police Building for Charles Gwathmey; a private residence for Richard Meier at The Perry Street Towers among many others, Kusnick’s sprawling Old Chatham residence, Kinderhill Farm, definitely hits in a different way. And it’s breathtaking.

When Kusnick and his wife, the interior designer Tracy Brown, purchased Kinderhill Farm in 2019 after a quarter-century in East Hampton, something just clicked. “Tracy and I wanted a change when the Hamptons became too money oriented, too ‘Wall Street’ for us,” he says. “The Hamptons became a very stressful, 24/7 ‘on’ environment. We left the Hamptons mostly because we wanted to be engaged in community, so we got involved with the Shaker Museum [of Mount Lebanon]. I’m on the board now and we now have a tremendous group of friends that we never experienced in the Hamptons. Kinderhill Farm was the last house Tracy and I looked at and we knew it was the one.”

The home was built pre-Civil War (circa 1850) with the main addition to the farmhouse estimated to have been built in 1890. Though certainly historic, the four-bedroom home is ready for its contemporary owners (central air, four fireplaces, smart house technology) as well as boasting an inviting, heated gunite pool and an impeccably maintained tennis court. Oh, and just past the pond, the refurbished barn doubles as an exercise room, craftsman workshop and is home to the de rigueur four-car garage. In a word, Kinderhill Farm checks all the boxes. All of them.

“When I’m here, there’s a real sense of stepping back,” Kusnick says. “You can see time elapse on this property as opposed to running with it. Here, I can clear my head, and we just love it.”

Kusnick and Brown divide their time between Kinderhill Farm and their Brooklyn residence so, the question has to be asked: Is Kusnick an Old Chatham local now? “Well, I’d like to be considered a local, but I don’t think I am,” he says, somewhat wistfully. “You know, Richard, there’s an old-time bar-restaurant here called Jackson’s and it’s real local. Let’s just say Tracy and I are very happy there. So, yeah, we’re definitely a long way from the Hamptons.”

In Old Chatham, at Kinderhill Farm, Kusnick is exactly where he’s meant to be. Home.