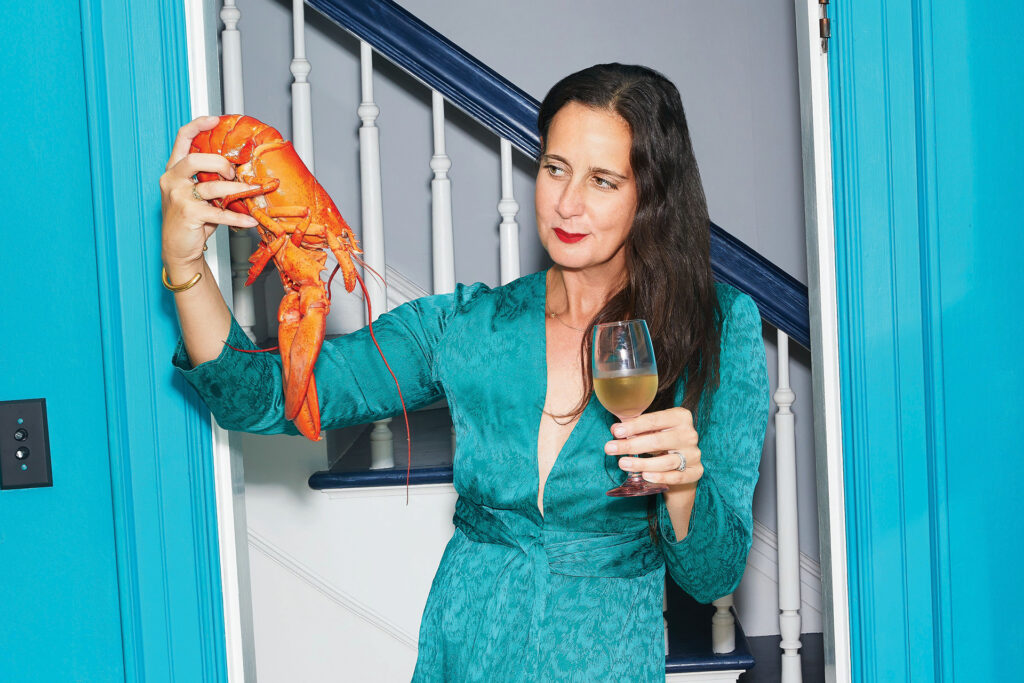 It was no surprise to me, even within the first few minutes of meeting Colu Henry, that I knew for a fact she was born an entertainer—not so much in the LOOK-AT-ME-I’M-A-STAR undeniability of, say, Lady Gaga, but in a you-can’t-take-your-eyes-off-of-her quality that more closely resembles… let’s go with Cate Blanchett. There’s just something special about this particular cookbook author, and I endeavored to find out more.

In the several eclectic lives Colu Henry has lived prior to landing in this corner of the globe to become a celebrated Hudson-based maker, she had pursued a career as a cabaret singer in New York City right out of Emerson College and followed that up with stints in restaurant public relations and fashion. But it was nearly a decade ago now that Henry, while working at the venerable magazine food bible, Bon Appétit, decided to publish personal recipes on Instagram with the catchy hashtag #backpocketpasta and yada-yada-yada, by golly it worked! One guess to what her first cookbook’s title was. Her second published effort—released earlier this year—is the gorgeously executed Colu Cooks: Easy Fancy Food (Abrams).

And here we are.

To be completely transparent, for many years now I’ve been given a head’s up about just how delightful (and talented) Colu Henry was from close friends of hers and Chad Silver, her husband who’s also quite the (furniture) maker himself. The Italian cooking standout and my mutual pals were emphatic: “Richard, you’ll absolutely love her—everyone does.” Being me, I was more than a little skeptical; I mean, who’s that nice, right? Well, Colu Henry is that nice. Almost annoyingly, effortlessly engaging, I-can’t-wait-to-have-a-long-brunch-with-you nice. And I instantly realized that she’s exactly the kind of person we all could use in our lives—and in our country—right now.

So, yeah, she’s an up-and-coming cookbook author with an approachable, relatable vibe, but Colu Henry, friends, is so much more than that. The verdict is in: Even from the confines of her assuredly charming Catskills kitchen, Colu Henry was and is an unabashed entertainer. Take a bow, Colu. Brava!

The following is an excerpt from Henry’s cookbook, Colu Cooks: Easy Fancy Food 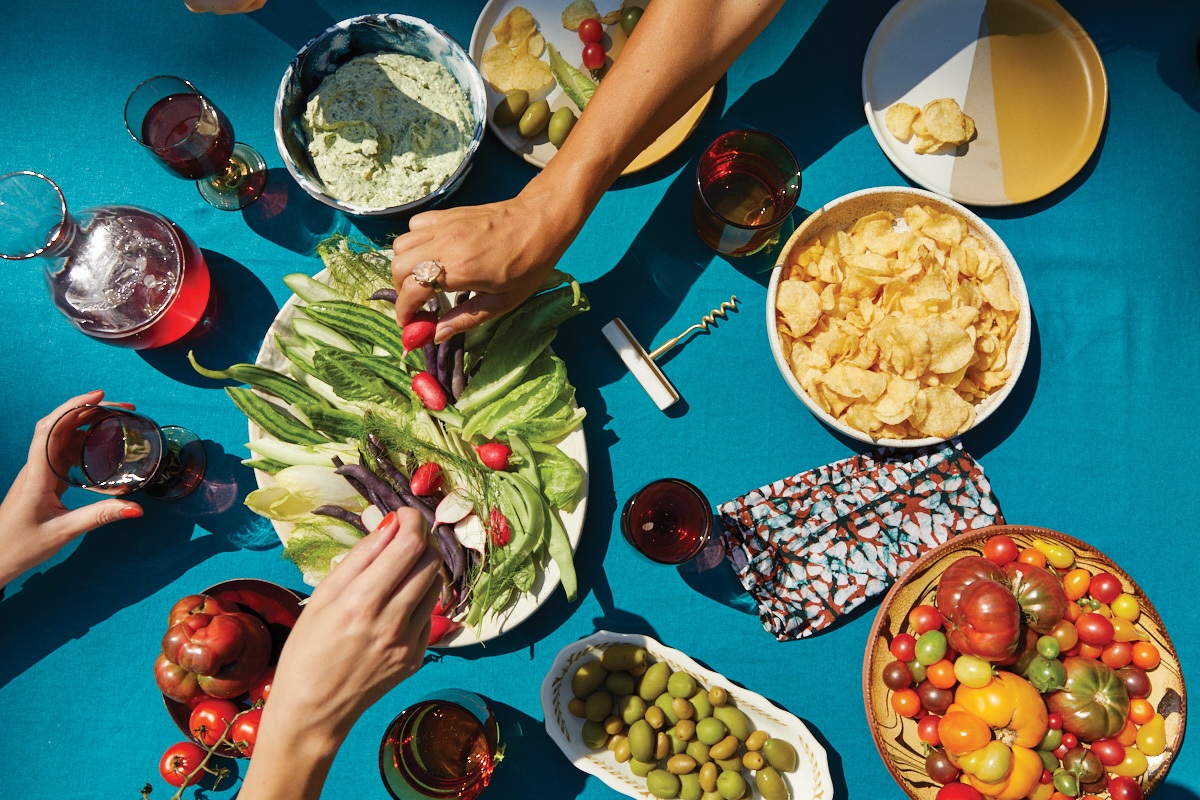 My friend Tamar and I established a family picnic tradition about one year into our friendship. (In my opinion, an appropriate time to put a tradition into place, as you know you’ve really committed to the relationship.) Our family picnic dinner consists of odds and ends, leftover from the week, and plenty of wine.

In recent months, this tradition has also become part of our routine with our no longer “new” neighbors Chris and Kelly. Because as soon as I get the five P.M. text “Drinks?,” we all know what it really means—I dust off the front porch chairs and, unrequested, take out the leftover olives I stored with the Italian artichokes in olive oil from last weekend, a wheel of already-wedged-into Camembert, a few slices of last night’s pork roast or chicken, and whatever else I can forage. There is also usually something pickled. We are all very, very good wine drinkers, so one must arrive prepared with sustenance. (Luck favors those that do, so I’m told.) There are more meats, cheeses, and crackers on their end to round out this meal, and in a flash it’s ten P.M.

We drizzled the eggs with the garlicky oil and some pickled chiles…In my book, it is still one of the most satisfying meals in my forty-four-year-old history.

In our ever-growing friend-family, these picnics generally take place at a walkable location on a Friday or Saturday evening. But do what feels right to you. If a Monday comes around and it feels appropriate, you should most certainly lean in and embrace it. There is no “right night” to cobble together a meal with friends.

For some inspiration, please allow me to provide you with some examples of family picnics past: One evening, I brought over roasted beets to Tamar’s, the remains of a meat and cheese plate, and some eggs to soft boil. I also had some leftover homemade mayonnaise, so I brought that too. Tamar had braised beef the night before, which she gently reheated in the oven, and then dressed with garlicky chive oil and wide ribbons of Treviso radicchio. We also drizzled the eggs with the garlicky oil and some pickled chiles. The beets were tossed with homemade sherry vinegar and topped with flaky salt. We combined our cheese and cured meats and put the board down in the center of the table. Her husband Pete’s father had made bread, which we tore apart with our hands and sopped our plates with. In my book (now literally), it is still one of the most satisfying meals in my forty-four-year-old history.

An evening of leftover, recipe-tested shrimp pâté spread onto endive leaves and smashed into our mouths is also high on the list, as is one with day-old roasted root vegetables with yogurt dressing and a side of meatballs swimming in cinnamon-spiked tomato sauce. There are no rules for a family picnic menu (although they generally tend never to be the same twice), I just happen to host a lot of cocktail parties, which is why mine tend to be meat, cheese, and brine forward. They are all about creating merriment and the ease of entertaining with your chosen family and throwing together a simple and soulful meal that is assembled with what you have as opposed to shopping, preparing, and cooking in advance.

And, if you cook often, infrequently, or barely at all, I have faith there is always something in your fridge or pantry you can pull together to feel nourishing and special, even if it’s filling a bowl full of potato chips and opening a bottle of Champagne on a stormy day to thank Mother Nature for her wild and wily ways. Wouldn’t you agree?