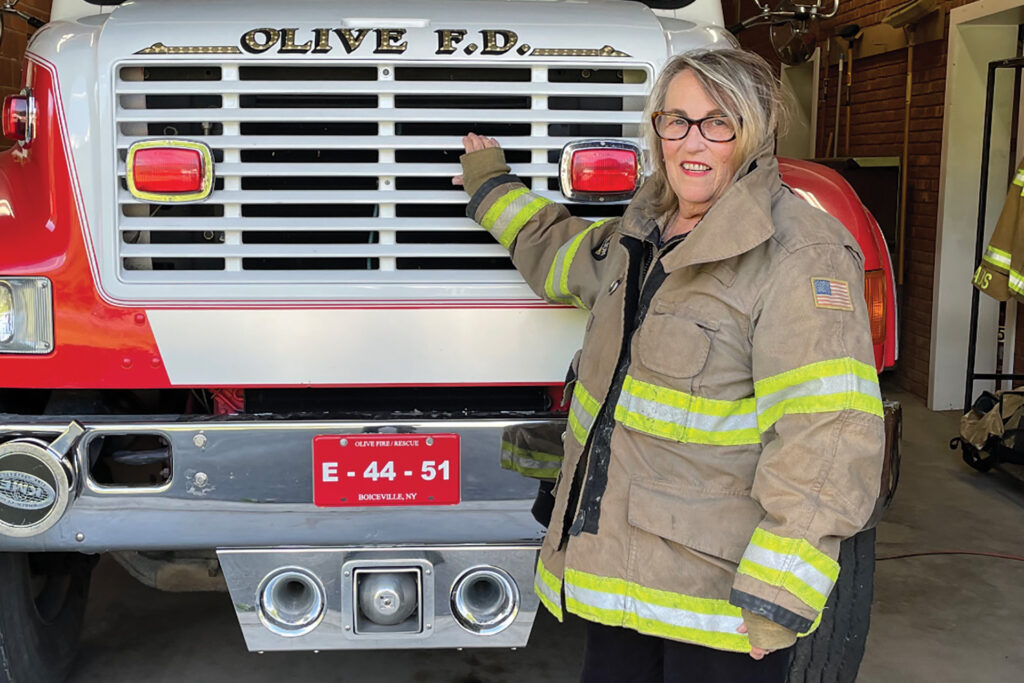 Diary: Why I Became A Volunteer Firefighter

Sometimes when I tell this story I imply that I joined the Olive Fire Department—specifically, Station No.5 in the bucolic hamlet of Boiceville—because I’m an altruist, or because I wanted to help my neighbors or because I believe in service. And while some of those things are true now, I joined for one reason: they told me I couldn’t.

So, when I was at the Boiceville Inn one night and some new friends were trying to talk my husband Steve into becoming a volunteer firefighter, I jumped right in. “I could be a volunteer,” I told them. “NO! NO! NO!” everyone cried in unison. “That won’t work.” Why not? I countered. “Because the boots will be too big.” OK, so I’ll buy my own. “No, you should join the Ladies Auxiliary.” What do they do? “They go to a fire and comfort the people whose house is burning.” Absolutely not. I’m not a very comforting figure.

For months I badgered everyone at the bar, and I could see their collective eyes roll as soon as I walked through the door. “There are no women in the fire department!” more than one person scolded.

But there was this one guy, John Bachor, a local’s local, and he just happened to be the chief of Station No.5. He nodded at me one night and a few weeks later Steve and I put in our applications. A month later we stood in the fire house and waited in an anteroom while they voted on us. It was the old school method using white balls and black balls, a sort-of anonymous system for voting. Someone came out to tell Steve he was in. They surrounded him and took him into the big room. I waited. Finally, they came to tell me I was in, too. “But you got two black balls.” I got the message: I hadn’t started, and I was already on probation.

All volunteer firefighters were given a box, the “Plectron,” that’d go off whenever there was a fire in our town. It omits a sound so piercing dogs run from it. At midnight, on my very first day as a volunteer firefighter, it went off. Steve and I rushed down to the firehouse, only to find out it was a false alarm. We went back home to sleep. An hour later that sound shattered the quiet night again. This time we went down and were told we should just stay in the firehouse in case the structure fire in the next town got any bigger and they needed us. Steve and I climbed on top of the fire truck and went to sleep on the hoses. Everyone else was acting as if this activity at 2 a.m. was perfectly normal and the most cheerful time of day.

Over the next six nights we had seven different calls. Not one of them was an actual fire. Car accidents and gas spills, yes; sometimes, we just stayed in the firehouse for hours waiting for an “all clear” signal from another town.

And then…we had our first fire call.

We were taking the day off, sitting around and smoking a joint when the Plectron went off signaling an automobile fire about half a mile from us. We jumped in our car and raced up there. And indeed, there was a car in the woods with a small fire in the back seat, a fire about as big as my hands.

Steve said, “I’ll go get the truck. You stay here and wait for the people!” We were sure there would be other folks, say, real firefighters, who’d come and put this little fire out. The fire was now as big as a bread box.

Steve showed up with the fire truck, but, alas, we had no idea how to get water out of it. We argued a bit about what we should’ve done, and who we could call now. Then, a gas can in the back seat of the car caught fire. Needless to say, the car blew up. Big time.

Weeks later we started taking Firematics classes. I had to learn from scratch, because I didn’t understand how the internal combustion engine worked, and apparently all knowledge seemed to flow from that. I held up the class weekly. They all hated me. Again.

But, a couple of times a month, the fire chief, John Bachor, would take me out in the firetruck. He taught me how to drive it. Sitting next to me he’d say things like, “Let’s say there are a thousand gallons of water in this truck and each gallon weighs more than eight pounds. How much weight is behind you?” 8000 pounds, I answered, so proud of myself. “Good; now, let’s see you try to stop this sucker.”

I was literally standing up on the brakes and no, the truck wasn’t slowing down one bit. Scary.

On my best night, John had me take the hose up a ladder to the roof of the local high school. Then, he turned it on. I genuinely almost flew off that roof, but I held my ground.

A couple of years in, we had a huge fire of our own, when Steve’s woodworking shop burned to the ground. I kept looking around for the people who would comfort us. It turned out our whole town was up to the task, donating time and materials to build the new shop. We made a sign that still hangs in the front of it: THE SHOP THAT FRIENDS BUILT. All of a sudden, I wasn’t an outsider; I wasn’t a newcomer; and I wasn’t an interloper. I was a local. It’s a badge I’ve worn proudly ever since. 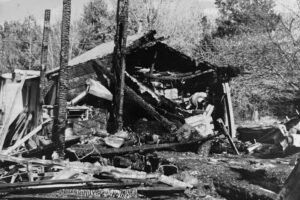