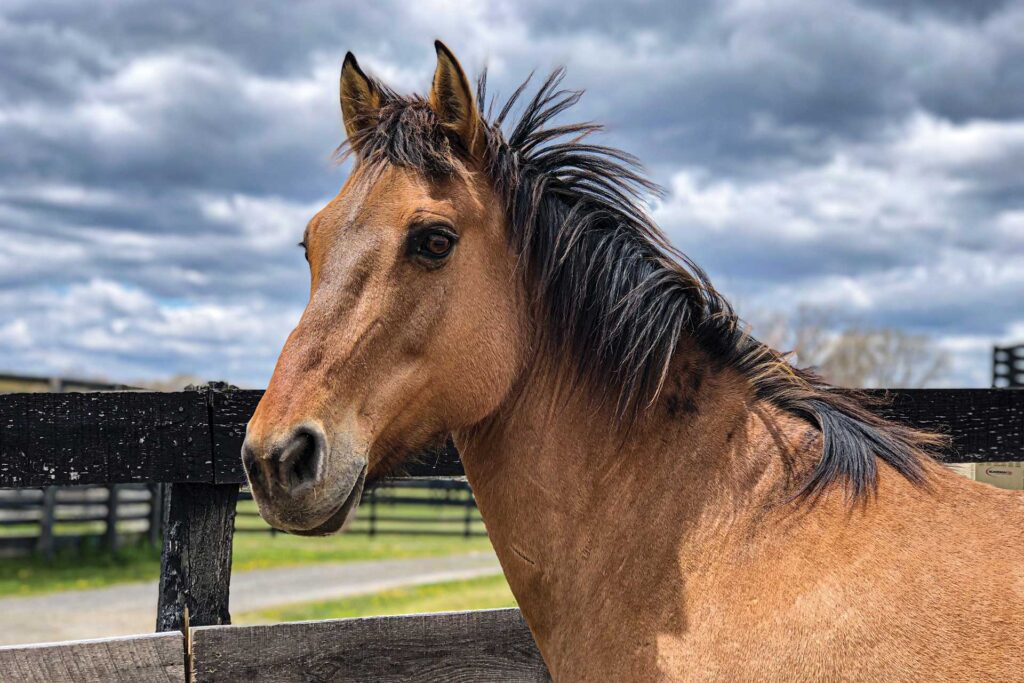 Just north of our ’hoods, in Saratoga Springs, where horses regularly sell for more than homes and my hometown, we don’t really like to think about what happens to Thoroughbreds after their racing careers
are over. We love to think about the magnificent creatures when they’re two, three and four years old—when a particularly speedy trip around the legendary Saratoga Race Course track could win us big bucks—but once they pass their prime racing age…Poof!  They’re gone from our minds.

But just because we don’t think about it, doesn’t mean that an ugly reality doesn’t exist: Roughly
7,500 American Thoroughbreds are sent to slaughter every year. And that’s just a small fraction of the 30,000 total horses that meet the same gruesome fate.

“Ending horse slaughter was the reason I founded Equine Advocates 26 years ago,” says Susan Wagner, who currently cares for 81 equines at her 140-acre sanctuary in Chatham. One such equine is CJ, a Thoroughbred formerly known as Jay W, who was purchased for $100,000 at the Keeneland Sales as a yearling nearly two decades ago. That’s right—though Thoroughbreds typically only race for a handful of years, they can live to be 25 or 30. That $100K didn’t necessarily pay off for the buyer, and Jay W was retired after an unimpressive 18-race career. It’s unclear where he went for the next decade and a half, but in 2021 Wagner caught wind that he was in a kill pen. “He presumably went from home to home,” she says. “Horses end up trading hands seven to eight times and then usually end up at auction, which is what happened to him. He was just hours from being shipped to México.”

“We’ve got a donkey who was locked in a stall for the first nine years of its life,” Wagner says. “We have PMU mares from Canada that were basically treated like drug machines. We have a Thoroughbred named Joey that won more than a quarter of a million dollars and then ended up in the hands of someone who was starving him to death—and I literally mean he was about a week away from dying from starvation.”

Another Equine Advocates resident is Zack, a 2,000-pound Belgian Draft Horse that was seized by police in a cruelty raid. Because of the neglect he suffered, he developed a serious disease in all four feet called canker, which many veterinarians and farriers can’t treat. Not about to take “no” for an answer, Wagner brought in world-famous equine podiatrist Ric Redden to perform somewhat of a miracle on Zack, who’s been canker-free for five months. “We consider these horses part of our family,” she says emphatically. “Once we get them, we do what we need to do in order to keep them well.”

And Equine Advocates isn’t alone in its noble (steed) work. In The Mountains region alone, there’s Old Chatham’s Little Brook Farm, which both cares for horses directly and oversees the care of horses that have been adopted out; Bloomingburg’s Equine Rescue, Inc., which specializes in critical care cases; and Richmond’s Berkshire HorseWorks, which utilizes many rescued horses in its equine-assisted therapy programs. “What’s good is we’re all a little bit different,” Wagner says of the other area rescue organizations. “Everybody has their own mission.”

For Equine Advocates, that mission is twofold: providing equines of all types with a forever home, and humane education through school field trips and open houses, which are held one Saturday a month from May through November. “Obviously, with little kids you’re not going to be talking about horse slaughter,” Wagner says. “But I fell in love with horses when I was three years old. There’s not a lot you really have to do to convince kids that horses are great.”

The same can be said of adults—one day spent watching the Thoroughbreds thunder around Saratoga’s fabled oval, and I was sold: Horses are worth saving. At any age.