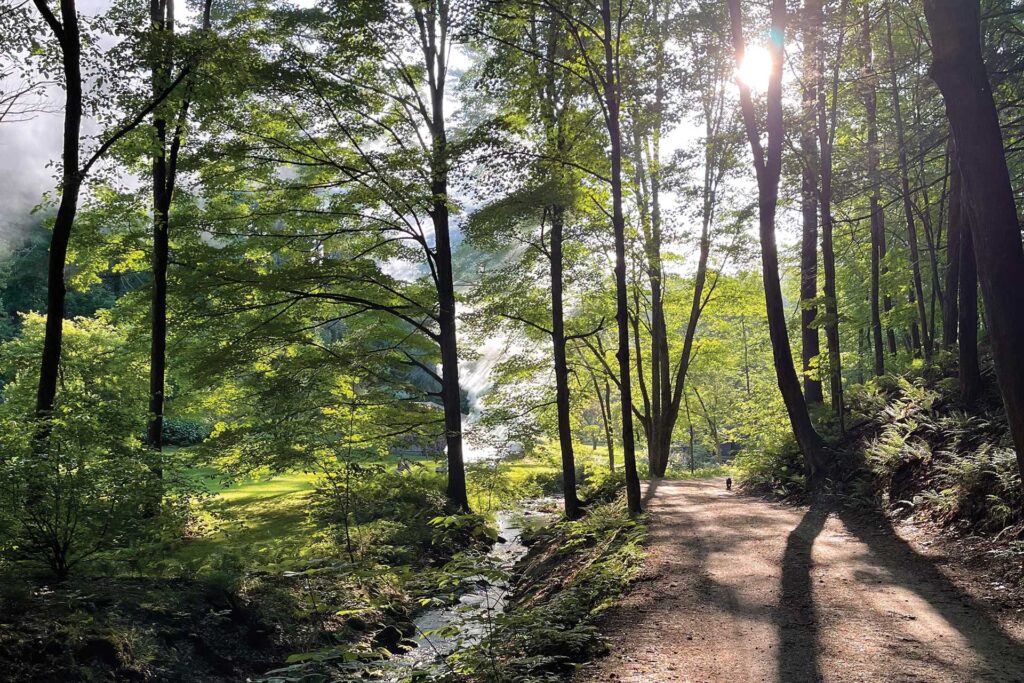 Pictures and Words by Dee Salomon

Here’s a question: If one gardens, is one, by default, a gardener?

I’ve had the privilege of working with landscape architects and garden designers inventing surroundings that encourage nature to create a planned paradise. And the work to keep the borders, the beds, the pergola and allées alive and performing their intended aesthetic duty is largely mine. I plant, fertilize, prune, water and tend. Yet I have never called myself a gardener as my passion lies in the woodland that extends beyond the garden beds.

The sexy smell of the earth, the impossible beauty of ferns uncoiling and spring ephemerals emerging under a canopy of trees. For woodland lovers like me, it’s hard not to notice that here in the Northeast we’re often not able to even enter a woodland due to its occupation by a handful of invasive shrubs: Barberry, bittersweet, multiflora rose, Japanese honeysuckle, burning bush and buckthorn are the main culprits, creating a dense and often spiked barrier to entry. Then another handful of weeds that inhibit the understory from growing, plants such as garlic mustard, which is allelopathic—meaning it emits a chemical that repels other plants from growing nearby.

The proliferation of these plants has devastated our woodland and made preserving trees incredibly difficult. Bittersweet chokes trees to death. Barberry changes the chemistry of the soil from its neutral to acidic pH to an alkalinity that trees cannot bear. Barberry also has become the shelter of choice for mice, which are the No.1 proliferators of ticks that carry Lyme disease, as its spiky thorns protect them from predators.

In areas where I’ve removed this noxious shrub—originally imported from Russia in 1875 and increasingly popular in the 1920s as a garden ornamental—my effort is timestamped by the height of the trees which have grown from seed that was already in the earth. They’ve reclaimed their territory; the trees are all about the same height. Since I began eradicating invasive species, less than a decade ago, more than 40 native species have appeared, some in only one location and others in large swaths. This happens spontaneously because, of course, nature abhors a vacuum. The seeds are there, underground, waiting for conditions into which it can safely grow. And they grow on their own into an unplanned paradise.

“I’m a knight errant, cutting my way through thorny vines (multiflora rose and barberry) to release a tree of its shackles (bittersweet) and let it grow free of constraints. Yes, I’m a romantic, I suppose.”

When it comes to the woods, you can call me an ungardener. Where gardening is essentially planting and tending to those plants, my work ungardening consists of getting rid of plants that aren’t native to this area of the Northeast. I create negative space. I flatter myself the Rachel Whiteread of the forest when I need to cheer myself up in a sophisticated way. Or, more playfully, I’m a knight errant, cutting my way through thorny vines (multiflora rose and barberry) to release a tree of its shackles (bittersweet) and let it grow free of constraints. Yes, I’m a romantic, I suppose.

While my work is to create negative space in the woods, the goal is always to encourage native trees, flowers and shrubs to grow freely where there once was an invasive plant (or several).

The work is daunting; I’ll spare you the details—there are identification apps to help spot invasives and plenty of online resources for step-by-step instructions on their eradication. But here is the trick: Once people begin to get a foothold in the woods, there’s a high propensity to want to do more. The woodland begins to communicate with you; there’s a sense of gratitude. As we learn more about how trees communicate with each other through underground networks of fungus we can at least consider the possibility that nature, in both its majesty and intricacy, is encouraging us to care for it.

Yes, it may sound like magical thinking. But the woods are indeed filled with magic. What better way to spend your weekend than by creating the conditions for nature’s magic to materialize?