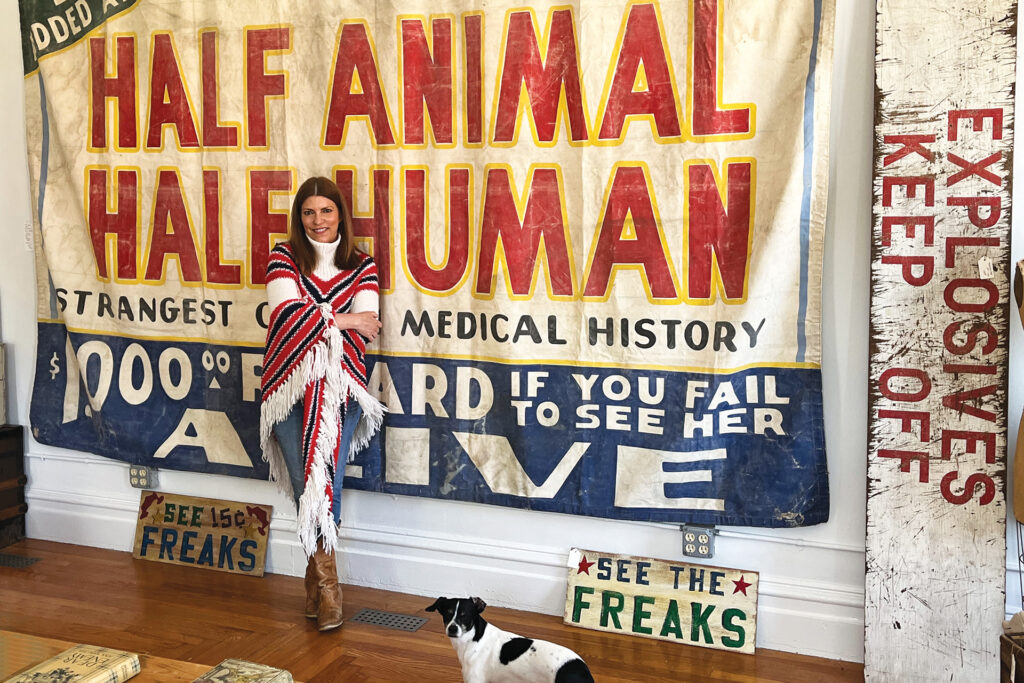 I met Sarah Gray Miller, owner of Coxsackie’s new creative collective, UnQuiet, years ago at InStyle Home Magazine, where she was my boss, though “boss” hardly seems the right word. Sarah Gray was—is—subversive and unconventional, a witty, irrepressible party girl with a hint of her childhood Natchez, MS twang and a keen, discerning eye for design, the cheekier the better. Miller, whose long magazine publishing career was largely devoted to shelter-esque publications (she was the editor in chief of Saveur, O At Home, InStyle Home, Country Living and Modern Farmer), describes her aesthetic as, “Kind of like a crazy, alcoholic, confirmed bachelor British uncle.”

Like many of the likeminded Hudson Valley friends she would come to meet, Miller left Manhattan for Greene County in 2007, part of an early wave of exiles from the city. Within two years, she’d happily discovered her tribe was made up of sculptors, musicians, artists, writers, stylists. Or, as she calls them, “Creatives who like to have a good time. I found myself surrounded by erudite, sophisticated people who weren’t the least bit snobby or pretentious. We were all wanting a sense of community and we were all hyper-social. We entertained at each other’s houses, the kind of experiences I never had in New York City.”

When COVID-19 hit and Gotham’s magazine industry slipped yet further into free fall, Miller knew it was time to pivot. She left her career, sold her home and rented a big old Coxsackie firehouse that faces the river, with an apartment upstairs and an old-time jail around back (more on that later). There, she opened her funky home goods shop, UnQuiet, with its tongue-in-cheek slogan: “Interiors, Antiques, Insubordination.”

Miller doesn’t take pleasure in owning stuff, she says, but she sure does have fun trolling for it (at estate sales, auctions and online), rehabbing it, injecting it with personality, styling it and generally subverting it, to comely effect. She’ll score a stuffy, ancient settee, for instance, and beautifully recover it with a pattern of…SSRI inhibitors. Elsewhere at UnQuiet: a wacky taxidermy piece Miller christened Squirrel Humping Log With Nut In Mouth and a male mannequin with a giant bulge, a gem she scored solely, she explains, because “it cracks me up.” Given her anti-minimalist, decidedly un-serious, more-is-more aesthetic, UnQuiet is not unlike a giant cabinet of curios, filled with exuberant, stylish pieces, but also Coney Island sideshow banners and Victorian-era pet portraits and frames—“local stuff, ridiculous stuff,” Miller says, including objects stamped with “Rhinebeck,” vintage pennants, species of bugs and skeletons and just about anything else that happens to catch her fancy. In other words, she says, “It’s not a place where you’re likely to find lamp cord scrunchies.”

As friends and customers (who frequently become friends) began stopping by, Miller would crack open a bottle of wine on a Friday at closing time. “I’m always ready to throw a party,” she says. “Growing up, my family was like that.” And word got around. These impromptu evenings have organically grown into standing Saturday night BYOB firehouse soirees where unfussy “crockpot entertaining” is in full force. Miller (or a guest cook) whips up a gumbo and throws rice into the cooker, or presses paninis or serves her classic dish, Frito Pies, which “is basically chili on top of Fritos,” she laughs. “Yanks get really confused.” These weekly shindigs don’t discriminate they draw from all ages (20 to 80) and all walks of life, a slew of fun-loving souls from Coxsackie, Athens and beyond, many of whom escaped Brooklyn, Los Angeles, Seattle and other far-flung US metropolises. “We have the best time,” Miller says. “It’s a real community.”

In fact, the firehouse parties got UnQuiet’s owner thinking: why not open a real bar, fittingly, in the former jail? Together with fourth generation Coxsackian and home builder Mark Deubert, Miller is poised to launch Ravish Liquors, partly for the lark of it and partly because, as she deadpans, “Alcohol is the No.1 retail business that is weather-impervious.” In Ravish Liquors, Miller and Deubert envision a small, cozy, laid-back spot with a speakeasy vibe. Maybe the former magazine editor will be behind the bar mixing martinis or giving patrons a sneak peek of her latest treasure hunt. Or maybe she’ll just be hanging out with a glass in hand, effortless being the life of the party.

Just A Tip: What To Do Before You Build Your Dream Outdoor Kitchen