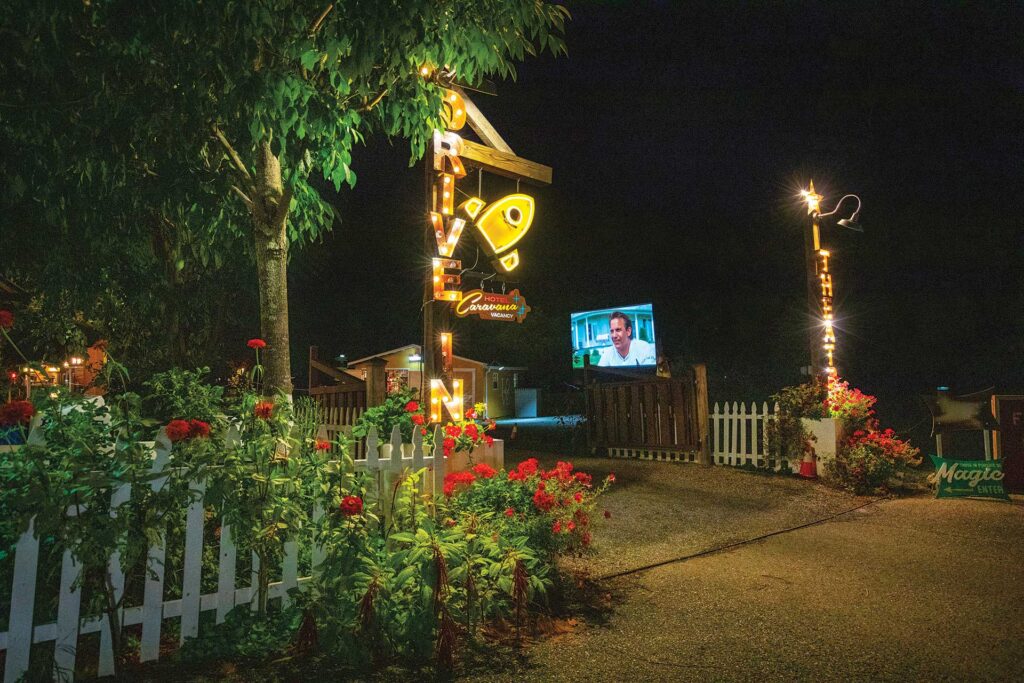 The Spot: Drive-Ins Are Back, Finally

My first experience with something being très “meta” happened in the summer of 1978 when I wasn’t quite 14 years old yet, as my parents, my three siblings and I sat in my dad’s large, vintage Mercedes with the a/c blasting to avoid the scorching June Miami heat. My parents had decided to take the family to a drive-in movie—a first for us—on the opening night of John Travolta’s latest film, Grease. Fresh off his Academy Award-nominated role in Saturday Night Fever, Travolta fever was everywhere and my sisters (and maybe even my mom) weren’t immune from the actor’s considerable charms. So, a drive-in it was.

The idea of sitting next to my brother and sisters in the backseat of our car for the better part of two hours seemed, if not unimaginable, then certainly unpleasant. I was wrong. The movie was a marvel. The screen was enormous. The sound, coming from speakers wedged in the windows of our car, no less, didn’t diminish from the experience at all. I was sold.

In the movie, there’s a famous scene when Danny (Travolta) takes Sandy (Olivia Newton-John) to a drive-in and everything falls apart for the happy couple. As I’m watching the movie in a drive-in while being in a drive-in, the sense of “this is really cool” washed over me. Very meta, indeed.

Of course, soon thereafter, everyone stopped going to drive-ins altogether and it wasn’t until recently—and exacerbated by the global pandemic’s requirement to socially distance from each other—did the drive-in enter my consciousness (and the planet’s) once again. That, and the fact that six years ago I relocated to the Hudson Valley from Manhattan and kept seeing a sprinkling of tempting drive-in options from Hyde Park to the Berkshires.

Even now, if I squint, I can still see Danny Zuko up on the drive-in screen singing his heart out in a melodic apology to his girl, Sandy. (I also remember the funny/alarming cartoon commercial in that same scene that showed a hot dog happily jumping inside a dancing bun—mind officially blown).

Social distancing or not, what could possibly be more American—more fun, frankly—than parking your car, eating popcorn with your favorite person next to you and marveling at the stars on the screen and the sky? I mean, c’mon! Now, that’s entertainment.